Dance delight at the festival 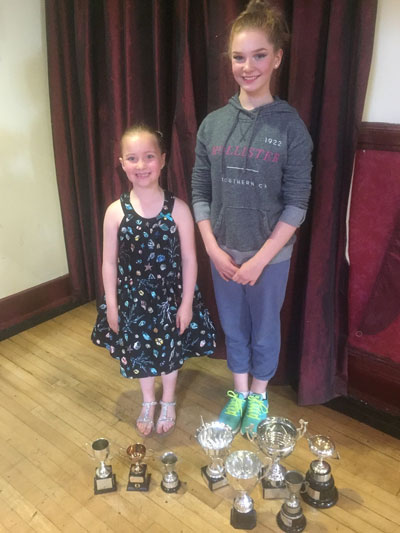 TROPHY TRAIL: Maddison Farrer, from Burnley, and Grace Hall, from Barrowford, with their trophies

Young dancers had their talents judged by a Royal Ballet School teacher when they competed at the annual Luther Greenwood dance festival at Colne.

Jayne Cooper, a former musical theatre dancer and cruise line choreographer who currently teaches at the Royal Ballet School Junior Associates in Southampton, was at The Muni for two days to adjudicate more than 250 performances by 60 boys and girls from across East Lancashire.

“Our adjudicator, who had travelled from Hampshire, said she was very impressed with the high standard of dancing and the smooth running of the festival.”

Competitors from Rossendale had a successful weekend, with Ruby Nuttall scooping six firsts in her age group, Maddison Thew four in hers, Evie Dootson four and her sister Hollie two. The sisters added another first in a duet. Lydia Hargreaves, Eleanor Broderick, Ebony Greenwood and Jordan Carter, also from Rossendale, each had one win.

It was a good weekend for Blackburn sisters Caitlan and Chelsea Dullenty. Caitlan had three firsts, Chelsea had one, and they had a winning duet.

From the Ribble Valley, Rebecca Taylor had four firsts in her age group, Emma West had two, and the duet of Rose Best and Gabrielle Slinger won two.

Top Pendle competitors were Nicole Bennett with two wins, and Grace Hall and Amber Letch, each with a first in their age group.