Music across the generations 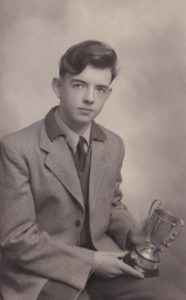 Jack Dowling with his winning trophy from the 1955 festival

A half-forgotten photograph celebrating the success of a teenage pianist is inspiring a new generation.

Jack Dowling won the W.H. Whitaker Trophy in the Under-16 category for soloists in the pianoforte classes at Colne Luther Greenwood Festival in 1955. His parents were so proud of Jack’s achievement they took him along to a professional photography studio to record his success.

Jack loved music all his life and passed his enthusiasm down to his children and grandchildren. The family home seemed quiet without Jack’s music after he died, and when his wife, Jean, came across the old photograph it prompted their daughter Joanne to wonder if anyone knew which piece of music he played to win, as she thought she would like to learn it.

Jean turned detective and enlisted the help of a friendly librarian near their home in Todmorden. “She found an old newspaper cutting about the outstanding achievements of Jack’s piano teacher, Sylvia Forbes,” said Jean. “Sylvia Forbes was legendary, and the writer mentioned Jack’s win at Colne.”

Armed with her scant information, Jean got in touch with us at Colne Festival. She knew the year and the name of the trophy, so with a bit more detective work and the festival’s archive we were able to solve the mystery. 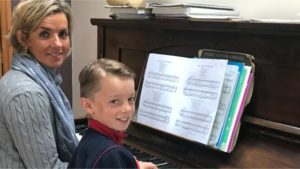 Jack won by playing a test piece, “Gopak” by Petrovich Mussorgsky. The music was published by J and W Chester Ltd. He played on a Saturday morning, on November 26th, 1955, in Class 31.

The entry fee was three shillings (15p) and his first prize earned him not only the W.H. Whitaker Trophy but also the princely sum of fifteen shillings (75p). “I don’t recall him telling us about the money”, laughed Jean.

Now 43, Joanne also had successes at Colne and in Burnley Festivals in the early 1980s. She says she will never forget one cold Saturday morning in Colne because during her performance one of the Festival volunteers dropped a tray of cutlery with a resounding crash. 13-year-old Joanne was playing Walter Carroll’s “Storm” with its much quieter counterpart “Sea Idol”, and it goes without saying the cutlery hit the floor during “Sea Idol”. Jean can still remember the gasps in the auditorium. Being her father’s daughter, young Joanne didn’t miss a beat – and finished her piece without wavering. She won the Luther Greenwood Memorial Cup for her performance. 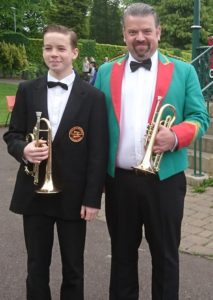 Jack’s son John Dowling with his son, named Jack, with their cornets

The “Gopak” test piece is challenging, and Joanne is still pondering about it, but her 10-year-old son, James is following in his grandad’s footsteps and learning it. He has acquired grandad’s piano and went on YouTube to see how it sounded.The most enjoyable performance, by far, took it at a leisurely pace, bringing out the beauty of the piece, just like grandad.“James is really interested and wants to be able to enter festivals like his grandad,” said Jean.

“Jack was a talented musician and also played the tuba. The house seemed so quiet without his music. Our eldest, John, played the cornet when he was younger but other interests took over. He’s 46 now and has picked up the cornet again and is teaching our 14-year-old grandson, Jack. They went to Hebden Bridge to see the brass bands play and now they have been to a conductors’ workshop by the Black Dyke Band’s conductor and played alongside other musicians. They were both thrilled.

“It’s lovely to know Jack’s music is living on.”