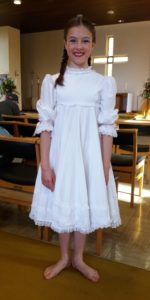 WINNING DANCE: Rebecca Taylor in her costume as Heidi

For a second successive time, our festival can boast a ‘best in the North West’ title with one of our successful dance competitors.

Rebecca Taylor (12), from Clitheroe, won first prize in dance, representing the Luther Greenwood Memorial Festival at the biennial North West Championships held by the British and International Federation of Festivals at Penwortham, Preston.

She follows in the footsteps of Clara Burnie, from Burnley, our representative who won the dance section in the 2015 regional event held at Alderley Edge.
Rebecca, a Year Eight pupil at Clitheroe Royal Grammar School, was among 40 winners from local festivals all over the North West competing in dance, music, and speech & drama.

She impressed the adjudicators in front of a packed audience of performers and supporters at St Leonard’s Church to win the dance section and a £100 prize with ‘Heidi Dreams’, her interpretation of the favourite children’s story.

Rebecca had been picked to represent Colne Luther Greenwood Memorial Festival after winning four first prizes at the annual dance contest at The Muni in spring.

She competes regularly in dance competitions, and trains with the Angela Westwell School of Dance. She has successfully auditioned for a place on monthly courses at the SLP Performing Arts College, Leeds, for ballet, tap, jazz and musical theatre.

Mum Mrs Gill Taylor said: “Rebecca is really thrilled at winning the title. She didn’t think she had a chance of winning because the competition was so strong.”

Our festival’s other representatives were singer Joe Renshaw, from Colne, who sang ‘The Gipsy Rover’ and pianist Bethany Zajac, from Shipley, who played Chopin’s Nocturne in C sharp minor.

The standard of performers, most of them in their teens, was extremely high at the regional event, and all three of our finalists were worthy representatives of ‘The Friendly Festival.’ We wish them all well in their future endeavours.