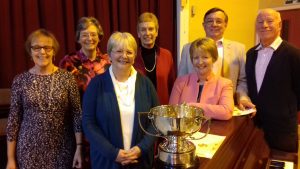 A newcomer to our festival, Laurette Evans, went home to Bury with one of our most coveted prizes, the Diamond Jubilee Trophy.

The trophy is awarded to the overall winner from competitors in our Oratorio, Operatic, Lieder and British Composer classes.

She awarded the Lancashire Telegraph Trophy to Judith in the Recital class, in which competitors sang three pieces. Judith, who is North West regional chairman of the UK Federation of Festivals, travelled from Crosby to compete in no fewer than seven classes.

Both ladies were also awarded a £25 cash prize.

A highlight of the day was Francis Nance, from Wallasey, winning the light opera/musicals class with ‘Epiphany’ from Sondheim’s ‘Sweeney Todd’, a demanding piece which illustrates Todd’s transformation from a wronged man into serial killer.

Catherine Hall-Smith was our festival accompanist, and did a sterling job for our competitors.