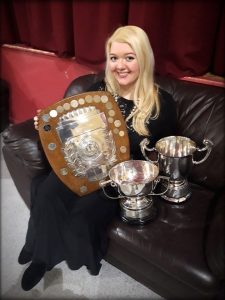 SOFA FULL OF SILVER: Evonne Beardsworth with her three trophies at the Luther Greenwood song festival.

Singer Evonne Beardsworth went home with an armful of silverware from the Luther Greenwood song festival.

Evonne, 33, from Foulridge, triumphed on home ground against competitors from all over the North West in the adult vocal classes at St John’s Methodist Church, Colne.

She gained the highest mark of the day to win the Lieder/art song class with Schubert’s ‘Heldenroslein’, won the light opera/musicals class with ‘Out There’ from The Hunchback of Notre Dame by Alan Menken then won the recital class with a selection of three songs before adding a second prize in operatic solo with ‘Habanera’ from Carmen..

She said: “I’ve just had such a lovely day getting to hear everybody sing. They were great competitors. I’m so thankful for my time at RNCM. Being around such talented people and inspirational teachers has really focused my music-making.”

Junior competitors from Pendle came up against keen competition from the Ilkley area, but pupils of Colne singing tutor David Wilkinson held their own. Joe Renshaw took the Silverman Shield for Pendle young competitor’s best aggregate mark, and there were wins for Kate Overend and Tom Pickup, and places for Adam Liversidge. 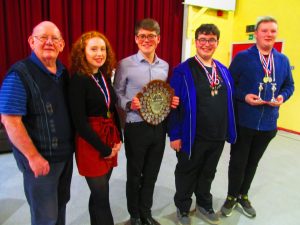