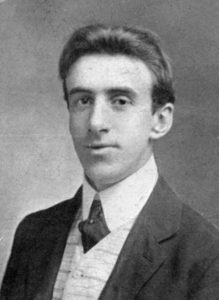 The town of Colne, home to the Luther Greenwood Memorial Festival, has a never-to-be-forgotten link to the Titanic disaster of April 15th, 1912.

Wallace Hartley, bandmaster on the ill-fated White Star liner, was born in Colne, grew up in the town and developed his talent for the violin in Colne Orchestra, where Luther Greenwood also played violin.

Wallace, who worked for a bank in Colne, moved to Huddersfield with his family, and became a professional musician. He first went to sea as a musician with the Cunard Line in 1909, but when Cunard transferred its musicians to Blacks’ agency, Wallace was sent to the White Star Line.

When he was offered a position on the Titanic, he was reluctant to leave his fiancée Maria Robinson, but agreed to join Titanic for its maiden voyage.

When the liner hit an iceberg and began to sink, Wallace Hartley and his fellow band members started playing dance music to help keep the passengers calm as the crew loaded the lifeboats. Survivors told how he and the band continued to play until the very end. 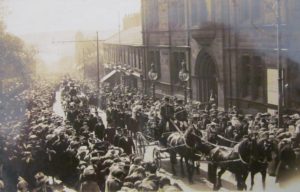 The Funeral procession through Colne

Wallace Hartley’s body, with his violin case strapped to him, was recovered with hundreds of other victims. His body was returned home via Liverpool and the funeral in his home town of Colne was a huge event, with some 40,000 people – double the town’s population – lining the route along the town’s main street..

Wallace Hartley’s grave is in Colne Cemetery, with the opening notes of Nearer My God To Thee inscribed on the monument. Outside Bethel Chapel in Burnley Road, where Colne Orchestral Society still rehearse to this day, is a Wallace Hartley memorial garden, dedicated in 2012.

A bronze bust of the town’s local hero, flanked by two of the Muses, stands on a plinth just a few yards from the Municipal Hall – now named The Muni – where our festival entrants compete each year.